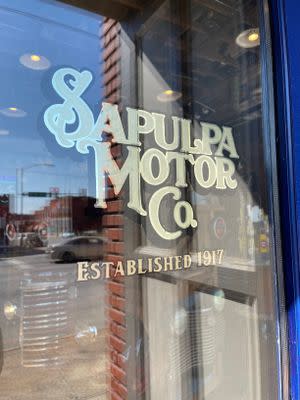 Michael Jones, the owner of Gasoline Alley Classics, cut the ceremonial red ribbon and opened the doors to his automotive memorabilia shop on Friday morning.

The 8,500 square foot building sits on the southwest corner of Main Street and Hobson Avenue in historic downtown Sapulpa.

In 2015, Jones and his family purchased the building that housed the Sapulpa Motor Company Model T dealership in 1917.

The new store, which offers automotive art decorations, gifts, memorabilia and apparel for men and women, is located just half a block from Route 66. It will participate in the Route 66 Passport program. For more information on this, click here.

Three more businesses are opening this week in historic downtown Sapulpa; they include the Crossroads Cookery at 117 East Dewey Avenue; they will open Friday night, be open all day Saturday for the Route 66 Blowout Car Show and Festival, and offer brunch on Sunday.

On Friday, Downtown Brown, a tanning salon, spa and boutique celebrated its grand opening at 110 East Dewey. On Thursday, Amber Marie & Company celebrated the grand opening of its Sapulpa store at 116 East Dewey Avenue on Route 66 in the Old City Hall building.

Construction is already underway on a pedestrian walkway that will be closed to traffic.

The old department store in Bayouth is also being renovated, according to Mark Lawson, director of economic development for Sapulpa. Plans call for a real estate office upstairs and retail on the first floor.

Can you add these last two graphics at the end of my story? I just confirmed these details with the city.

Lawson said the development and growth of downtown Sapulpa is unfolding through a series of bond proposals passed by voters in January 2020, one of which called for the creation of a master plan for the center. -town.

Plans are already underway to create a “Route 66 Christmas Chute” in Sapulpa on Dewey Avenue in November. A three-block area will be closed to traffic and covered in Christmas decorations. For more information, click here.

Visualization of clothing in 3D: the answer to the pollution of fast fashion?