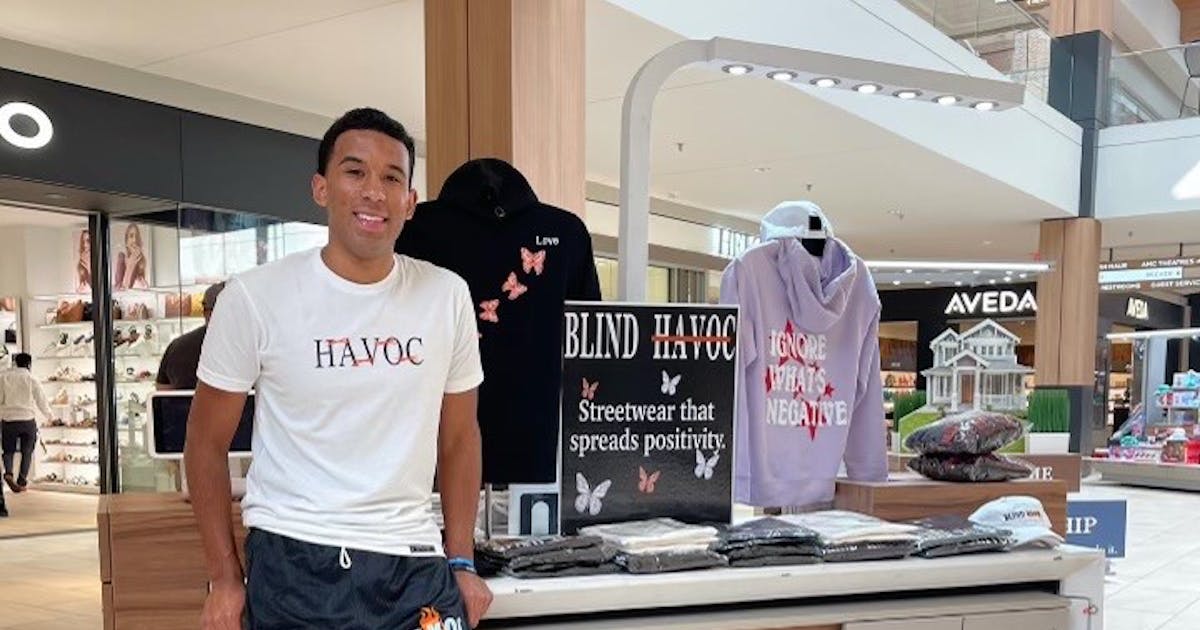 Last month, Jayton Metcalf stood in a booth at the Rosedale Mall and showed off items from his clothing line to a few potential customers. I was walking through the mall with my daughters when I saw it and asked about his clothing company, Blind Havoc.

His sweatshirts feature messages of positivity, including phrases such as “Ignore What’s Negative” and “Love Your Neighbor”. During the pandemic, the 22-year-old designer said he decided to do his part to bring some light to the people around him when interaction became more restrictive.

“Once the pandemic put an end to that, I was just trying to figure out what I could do in quarantine to still try to spread a positive message,” Metcalf said.

It was a Midwestern moment as we started talking about his vision. Not only do we have similar last names, but he mentioned that his father is Rob Metcalf, a former Gophers men’s basketball player. I knew his father’s name from my time on the Gophers beat over a decade ago. Someone should do a study on the mutual ties we all seem to have in the Twin Cities.

I am always fascinated by young people who are innovative and ambitious. He too was intentional.

Metcalf, a business marketer at the University of Minnesota, said he was volunteering in north Minneapolis with Volunteers of America when the pandemic eliminated those opportunities. Some of the young people he had worked with had been listed as at-risk cases.

During his time with these students, however, he learned that they were misunderstood. They were kids who were mostly looking for a connection. Although he discussed academics with them, he mostly tried to build relationships.

Without that outlet in the pandemic, Metcalf had plenty of free time.

He used it to advance his clothing line. But he didn’t know where to start, so he studied YouTube videos to learn. Then he paid $200 to get his first batch of t-shirts and he was ready to go.

“That’s when I discovered how to start a clothing brand and I continued to research it,” he said. “Besides, I wanted it to feel positive. It was a message that I thought was most true for myself. Growing up in a family where no matter what, my parents always insisted, ‘Be always nice to everyone and try to include everyone.'”

However, he first needed a name for his new brand. He said he wanted a name that would illustrate what has seemed so difficult to do in recent years. “Blind Havoc” is a name he created to send the message that there is nothing wrong with moving forward in chaos.

He invested in the kiosk last summer and his business has grown ever since. Even Suni Lee, the Olympic gold medalist, bought one of his sweatshirts. The brand’s Instagram account has nearly 8,000 followers.

The buzz impressed Metcalf, but it was the impact that was most touching.

He’s heard of people who have gone through a number of hurdles during the pandemic — divorces, financial issues and depression — and bought one of his items because of his post.

Metcalf said she recently heard of a mother who bought one of her t-shirts and gave it to her son who was struggling with mental health issues.

“I just got this email the other day and it’s a much better feeling than selling a bunch of stuff,” he said. “Posts where people let me know how Blind Havoc has helped them in a small way or affected them in a positive way…that’s the best feedback.”

I sometimes assume that our reactions in these uplifting moments are sporadic and short-lived.

After a message makes us smile, cry or laugh, where do we take it? This has been one of the most difficult elements in recent years. Hard to know what will stick. I bought a sweatshirt from Metcalf to support him. And when I got home, I kept looking at the message: “Ignore What’s Negative”. It made me feel something.

I wore it the next day and a few days later wore it again while dining at a local restaurant with my youngest daughter. As we were finishing our meals, I felt someone’s hand on my left shoulder. My back was turned so I had no idea who hit me. I’m usually more suspicious than inviting in these cases.

Then a gray-haired woman stood next to me and smiled. “I like that message on your sweater,” she said. We didn’t become friends. We did not clap hands or arms.

But it was an acknowledgment of something, perhaps a glimpse of what we can be if we can navigate the ominous signs around us and believe in something brighter.

“The last few years have been really tough for people,” Metcalf said. “I feel like I have the ability to help shift their mindset a bit, more towards the positive light.”

Myron Medcalf is a local columnist for the Star Tribune and a national writer and radio host for ESPN. His column appears in print on Sundays twice a month and also online.

Shop, Sip, Get in the Holiday Spirit and Remember the Edmond Fitzgerald: Valley Views